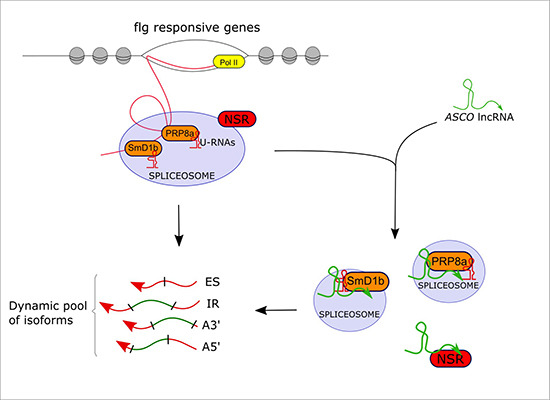 Abstract Alternative splicing (AS) is a major source of transcriptome diversity. Long noncoding RNAs (lncRNAs) have emerged as regulators of AS through different molecular mechanisms. In Arabidopsis thaliana, the AS regulators NSRs interact with the ALTERNATIVE SPLICING COMPETITOR (ASCO) lncRNA. Here, we analyze the effect of the knock-down and overexpression of ASCO at the genome-wide level and find a large number of deregulated and differentially spliced genes related to flagellin responses and biotic stress. In agreement, ASCO-silenced plants are more sensitive to flagellin. However, only a minor subset of deregulated genes overlaps with the AS defects of the nsra/b double mutant, suggesting an alternative way of action for ASCO. Using biotin-labeled oligonucleotides for RNA-mediated ribonucleoprotein purification, we show that ASCO binds to the highly conserved spliceosome component PRP8a. ASCO overaccumulation impairs the recognition of specific flagellin-related transcripts by PRP8a. We further show that ASCO also binds to another spliceosome component, SmD1b, indicating that it interacts with multiple splicing factors. Hence, lncRNAs may integrate a dynamic network including spliceosome core proteins, to modulate transcriptome reprogramming in eukaryotes.