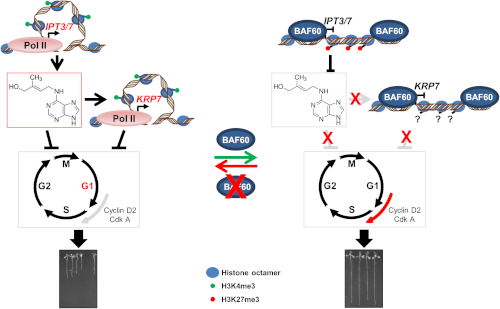 Chromatin architecture determines transcriptional accessibility to DNA and consequently gene expression levels in response to developmental and environmental stimuli. Recently, chromatin remodelers such as SWI/SNF complexes have been recognized as key regulators of chromatin architecture. To gain insight into the function of these complexes during root development, we have analyzed Arabidopsis knock-down lines for one sub-unit of SWI/SNF complexes: BAF60. Here, we show that BAF60 is a positive regulator of root development and cell cycle progression in the root meristem via its ability to down-regulate cytokinin production. By opposing both the deposition of active histone marks and the formation of a chromatin regulatory loop, BAF60 negatively regulates two crucial target genes for cytokinin biosynthesis (IPT3 and IPT7) and one cell cycle inhibitor (KRP7). Our results demonstrate that SWI/SNF complexes containing BAF60 are key factors governing the equilibrium between formation and dissociation of a chromatin loop controlling phytohormone production and cell cycle progression.